In my post about the 2016 SINDy paper by Brunton et al., I showed how to implement the ideas in that paper from scratch, and discovered the nonlinear three-dimensional Lorenz system based solely on data samples. However, the data samples were generated using the Lorenz system itself. This was a good approach to give us confidence that the method works, but in a real-world application we don’t know what the system is during data generation — that’s the whole point of SINDy, to discover the system!

In this post, we’ll collect our data experimentally, and then use the PySINDy package to discover the system that describes it. PySINDy provides us with an API that implements the ideas in the original SINDy paper, along with some improvements from subsequent papers. This is super convenient — in a real-world project there’s no reason to reinvent the wheel by providing our own implementation!

The Python code for this project can be found on github. All the files mentioned in this blog post are under the oscillator-pysindy directory.

I divided the code into the following three main sections, each in its own file:

Let’s start by discussing how we gather the data.

In this project, we want to discover a system of ordinary differential equations that describes the trajectory of the paint can in this video:

Our first task is to collect data points for our experiment — in this case our data points represent the position of the paint can over time. We could have taken many different approaches in the representation of this data. In this project our data consists of the (x, y) coordinates of the center of the paint can over the frames in the video, so the shape of is . We gathered this information by using the CSRT Tracker found in the OpenCV package:

Let’s take a look at the video with the overlays:

Then, in the main function of the 1_processs_data.py file, we call the function that collects the data . We also create a list of timestamps , one corresponding to each data sample in , which in this case is just a list from to .

You may be wondering how you can figure out the bounding box of the paint can in the first frame. How did I come up with the coordinates in the code above? I found two ways that worked well for me:

And that’s all there is to it. We have our data and the corresponding timestamps . We won’t calculate derivatives in this step — instead, we’ll have PySINDy calculate them in the fitting step. We’re now ready to use PySINDy to get a system of ordinary differential equations that describes the motion of the paint can.

If you try to ask PySINDy for a model by simply giving it all the data collected in the previous section, you won’t get great results. Machine learning is a powerful tool, but you still have to think and use good judgement. We may not know the exact equations of the movement, but we can use basic knowledge of ordinary differential equations to make some guesses that will help guide PySINDy in the right direction.

Let’s first consider the vertical movement of the paint can. This movement resembles that of the well-studied damped harmonic oscillator, which can be represented by the following second-order linear equation:

So, we can make an informed guess that our vertical coordinate will have strong similarities to this equation. However, the equation above is second-order, and PySINDy is only capable of discovering the function on the right-hand-side of first-order systems of the form:

Therefore, in order to make use of our assumption, we need to first turn the second-order damped harmonic oscillator equation into a system of two first-order equations. We can do that with the aid of two new variables, and , that correspond to the following:

The equation can then be re-written as the following system:

This is great information to have, because we now know that the vertical movement most likely needs two coordinates to be represented as a system of first-order equations: one of them being the coordinate that was recorded by the tracker, and the other one being its derivative. And we can pass along this information to PySINDy, as we’ll see later.

Now let’s consider the horizontal movement of the paint can. This time the movement resembles a pendulum, and we also have a well-studied ordinary differential equation that represents that trajectory. However, the movement is so slight that the damped harmonic oscillator equation is probably a good enough approximation for our purposes. It’s also much simpler than the pendulum equation, which would require a change of variables (great topic for a future post). Therefore, we’ll use the exact same technique to help PySINDy understand the horizontal movement: we’ll assume that it needs two coordinates, one of them being the coordinate recorded by the tracker, and the other one being its derivative.

Notice that I give each model two coordinates, one with spatial measurements gathered by the tracker and another with its derivatives (calculated using the Finite Differences method). Notice also that I choose the Sequential Thresholded Least-Squares (STLSQ) method to find a sparse set of candidate functions. I explain this algorithm in detail in my previous post.

If I set THRESHOLD to and MAX_ITERATIONS to , PySINDy discovers the following coefficients and systems:

We discovered systems of ordinary differential equations for both types of movement! But can they predict the trajectory of a bouncing paint can? Let’s take a look in the next section.

In this section, we’ll use the two models to predict trajectories for the horizontal and vertical movements of the paint can. In order to get a trajectory, we need to specify initial conditions for our coordinates , , , and . We also need a list of timestamps, which determines the length of the trajectory. We chose the same initial conditions and length as the original trajectory we tracked, so that we can better compare them. Then we can simply call the simulate(...) function from the model to get the predicted trajectory:

Let’s visualize our predicted trajectory for and , and compare it with the original: 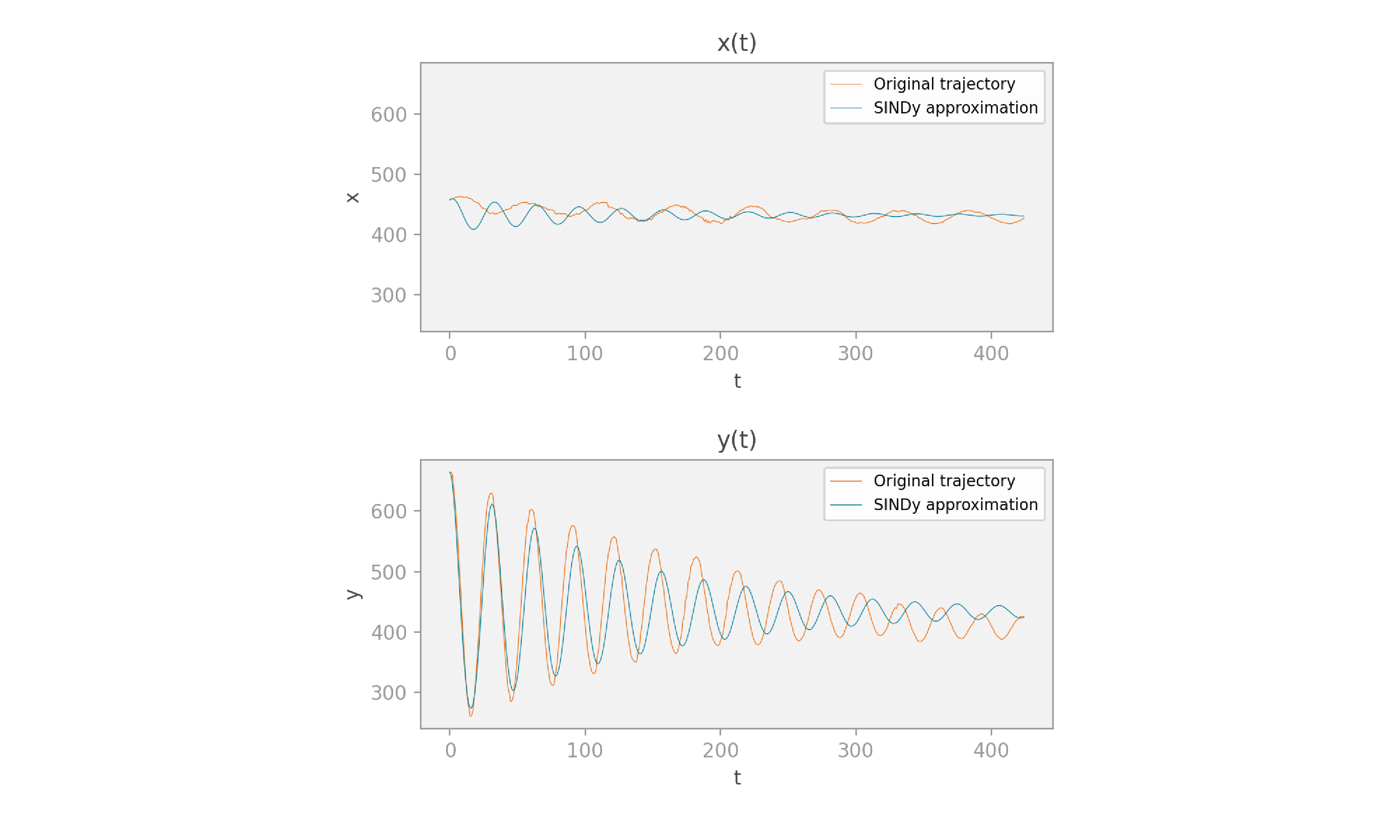 Not too bad. Especially if we take into account that our data is quite noisy (because the tracking isn’t very accurate), and that the calculation of the derivatives compounds the noise. The graphs have the right overall shape, even if they don’t match in precise detail.

The complete Python code for this project can be found on github.

Hopefully this gives you some ideas on how you can use PySINDy with your own experimental data. Thank you for reading, and best of luck for your SINDy applications!